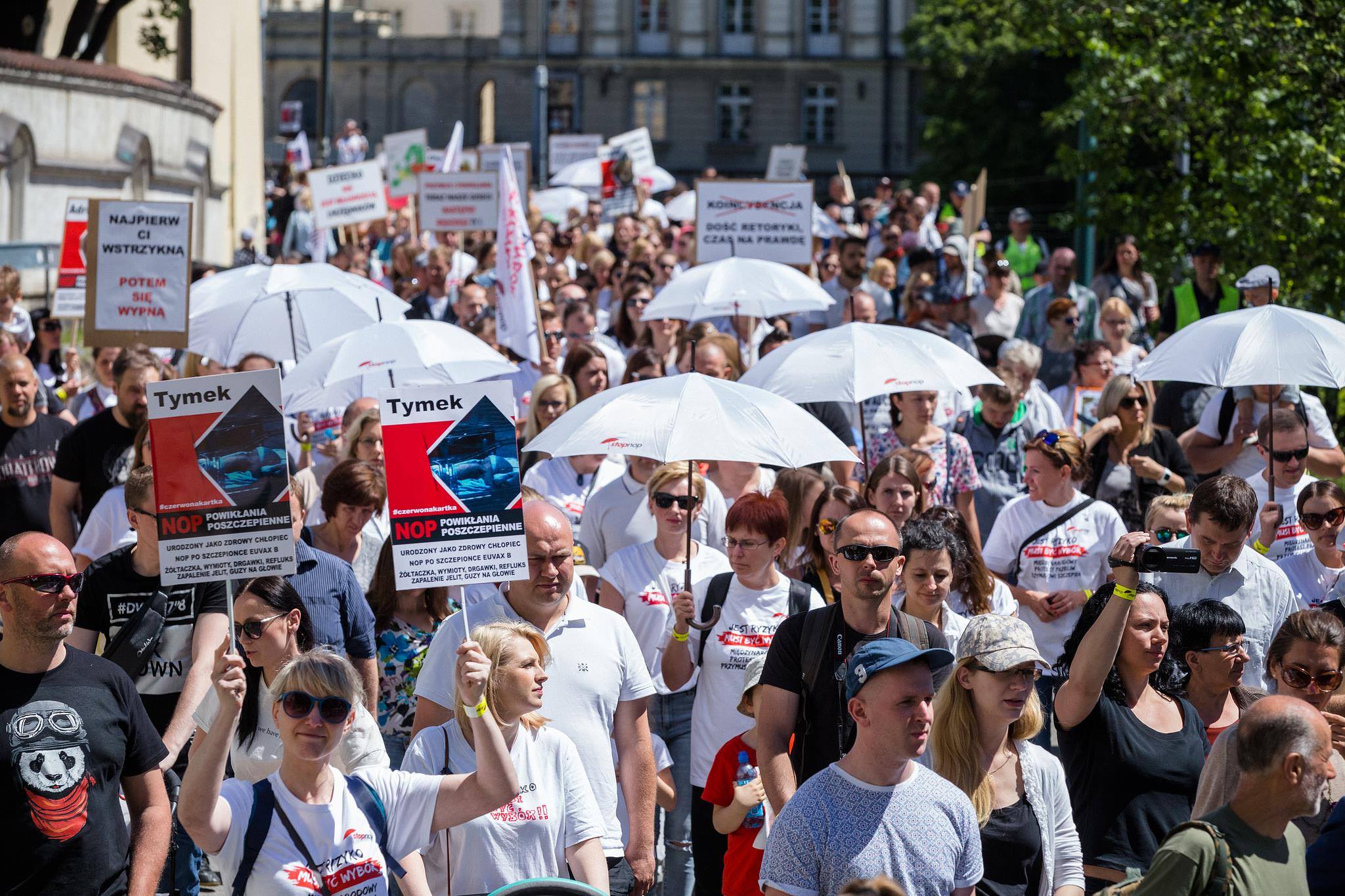 On the 3rd of June, 2017, approximately ten thousand Polish people – adults and children – were protesting on the streets of Warsaw against inhumane treatment and mandatory vaccinations. The turnout exceeded all expectations, only a few hundreds people were expected to attend. Families from all over Poland demanded the end of coercion, claiming their rights as a family, pointing to ignoring post-vaccinal complications and the uncontrolled impact of the pharmaceutical industry on the health system.
Dozens of „red cards” with photos and names of children injured and killed by side effects from the vaccines, signs and banners with slogans, white umbrellas with the The National Assosiation of knowledge about Vaccination“STOP NOP” logo could be seen everywhere. Protesters were carrying signs that read:”Parents! Watch your baby after vaccination!”, “Children are not owned by officials”, “Radziwiłł must leave!” (polish ministry of health), Sanitary-epidemiological station on the leash of pharmaceutical companies!”
There was much indignation, but also great hope, when everyone realized how many of us overcame our fear and went out into the street expressing our opposition to the vaccination terror.
– Where is the media? Enough lies! – thousands screamed.
Unfortunately, the mainstream media didn’t report the march, although TVP Info (public television) reporters were spotted doing interviews with protesters .
„Polish parents should have the right to choose because they know their children best”
These are the words of the Prime Minister Beata Szydlo, uttered in her first speech after her victorious election. She also talked about how important the development of Polish families is. She asserted that the government puts on pro-family and pro-natalist policies to break the demographic collapse. She emphasized that the government’s new social policies are described in two key words: family and justice.

„Our government will be very supportive of Polish families, this is a priority that every politician sitting in this room should take to heart. Polish families are very important. Families, not only young ones, need work and decent pay, housing and good health care.”

– 1,5 years after the promises od the Prime Minister , on June 3rd, 2017 we all said “Enough is enough”!
Almost ten thousands Polish mothers, fathers, grandmothers and grandparents with children and grandchildren gathered together in front of the Ministry of Health in Warsaw. These people were protesting against the mandatory vaccination of newborns, infants and children in Poland. They came from all over Poland to demonstrate their disappointment, sadness, anger and disagreement with inhumane treatment and cruelty towards Polish families,and Polish children from contractors involved in coercion.
Dear Prime Minister Beata Szydło! We would like to invite you to a personal meeting with representatives from the „STOP NOP”. This is the Association which represents the parents of the injured children. May the systemic violence against Polish families be over once and for all.  http://stopnop.com.pl/czy-faktycznie-polscy-rodzice-beda-mieli-prawo-wyboru-list-otwarty-do-premier/
This is the latest news from Poland!
A doctor ordered to vaccinate a child who had a weakened immune system after a series of illnesses, as a result the child suffered severe complications. Parents complained to the Ministry of Health and other health authorities because the doctor had ignored his duty and hadn’t reported any adverse reactions.
The case was dismissed.
Instead, parents had to give explanations to the police officers because of the medical facility’s and doctor’s incompetence and negligence … They were reported to the prosecutor’s office for refusing to vaccinate another child in fear of complications.
Now..on August 24th 2017 the family will attend the second hearing in a Family Court for limiting parental authority because of the their refusal to vaccinate… Beyond belief…..No comments… https://www.facebook.com/events/1099998653466176/
On 6th of September another criminal case against Justyna Socha was held for the petition Stop the pharmaceutical lobbyist in public administration. http://zmienmy.to/petycja/stop-lobbystom-koncernow-farmaceutycznych-w-administracji-publicznej/
The reason for the petition was the request for the inspection over the impact of the pharmaceutical industry on the Minister’s of Health policies.
_______________
More photos: http://stopnop.com.pl/protest-przeciw-przymusowi-szczepien-relacja-i-nowe-zdjecia/
http://stopnop.com.pl/tysiace-protestowaly-przeciw-przymusowi-szczepien-zdjecia-artykuly-i-video/
Video: https://www.youtube.com/watch?v=hQW61P4TYGM
https://www.youtube.com/watch?v=89zG2WoKTVU
https://www.youtube.com/watch?v=E5YjyrQj3pA
https://www.youtube.com/watch?v=nBgY8hrp_Fk
https://www.youtube.com/watch?v=0i9tA4jiq1Q
https://www.youtube.com/watch?v=FK1tYTC4f18